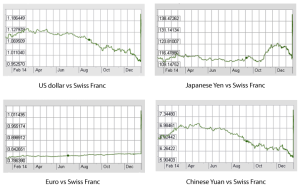 Today Switzerland’s central bank sent shock waves through the financial markets by removing a 3-year cap on the Swiss franc. By the end of the trading day the Swiss franc was up 17% against the euro,  up 27% against the US dollar and Chinese yuan and up 16% against the Japanese yen. This rise of value reversed the flat or downward trend seen last year for most major currencies.

With governments desperate to “fix” their ailing national economies, mechanics at the Central Banks are at it again and the phrase  “Fix-it-again-Tony “1  is back in vogue. With tools such as Quantitative Easing , Operation Twist  or historically low interest rates  Central Banks have poured some 12 trillion virtual dollars into the world economy. These actions in part are attempts to bolster a seized banking system  and ease the debt service of banks in the financial system.  This has resulted in Japan, Switzerland and soon the European Union central banks in a competitive race to devalue each of their currencies.

Money is a store of value

One important principle for all Central banks  is to maintain the intrinsic value  or stability their currency.  They do this by changing bank interest rates. Are these recent actions by Japan, Switzerland or other countries worrisome?  The short answer is Yes.  As an investor or even as a business owner, if you cannot anticipate that the value of your  product  or cost of goods in the near-term you are likely to raise your prices today and not wait until tomorrow.  If your currency falls, for those goods that your import, they are now more expensive. Your profit margin just shrank proportionately. Conversely if your currency just strengthened. as seen recently with the US dollar, your product are now price uncompetitive compared to your overseas competitors.

Central Banks are now in a competitive race to devalue their currencies and ultimately investors will chase assets perceived  as safe and maintain value.

Fiat currencies: Money declared by a government that is not backed by a physical commodity such as gold or silver. The value of  the money is derived from the relationship between supply and demand rather than the value of the material that the money is made of.

Properties of Money:
(1) Allows goods or services to be easily valued such as bananas at 50¢ a pound are more expensive than at 10¢ a pound.
(2) An easy way to exchange for goods and services instead of barter. It is easier and faster to give 10 silver coins for that sac of grain than negotiate for 10 chickens (which you need to find if you don’t have).
(3) A store of value over time. If we delay our purchases or save for the future, the cost of that future purchase or our savings should be the same or similar to we know as of today. Money was originally based on gold which was seen as immutable and unlike iron did not rust away.
(4) Must be liquidity: Liquidity means that it can be easily exchanged for goods and services. Similar to our example in #2 it is far easier to save 10 silver coins in ones pocket than 10 chickens.

Inflation: the rate at which the general level of prices for products or services rise and conversely one purchasing power falls. That hamburger that cost $1 yesterday just went up to $1.25.

“Fix it again tony” was a derogatory slang in the 1970’s to 80’s for the Italian auto brand FIAT stemming from its cars frequent breakdowns.