Investors looking for bargains in energy  or other commodities should proceed with caution. It could be a classical value trap.  Commodities or their related stocks appear cheap because of their recent large price falls but they are still expensive relative to their intrinsic value.

Don’t bet on a rapid rebound in  commodity prices either. 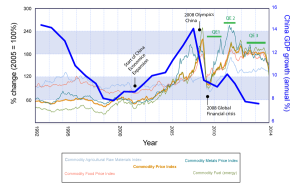 The largest consumer of commodities this last 20 years was China. From 2002 through 2008 China’s growth nearly doubled. From a low annual GDP of 7.6%  back in 1998,  China’s GDP grew to 14.2% in 2007 as China rapidly modernized its economy.   This one-time event changed how the market viewed commodities and push asset prices to unprecedented levels.  Added to the China factor was the notion that oil, gold or other commodities could be used as traded investments,  and the best way to bet on rising commodity prices  was through options and futures contracts. Commodity speculators in oil alone increased 17-fold from 2002 to 2014 and despite the rapid decline in oil, the number of speculators is still 10 times higher than it was back in 2002.

Since the global financial crisis China’s growth has slowed to around 7% annually and its demand for oil or other commodities has moderated. Under normal conditions China’s slowed growth should have caused a corresponding decreased in commodity prices; perhaps returning  to 2002 levels.  However the impact of monetary easing by the Federal Reserve  and other central banks by “quantitative easing” or QE appears to have artificially bolstered the price of commodities during these last 6 years.

Investors looking for bargains in the energy sector  or other commodities will wait for a long time to see a good return on investment. One silver lining in this dark cloud is that food and transportation companies or manufacturers who use large amounts of energy or metal will benefit, along with their shareholders. from these lower material prices.

The Ghost of Oil Prices Past, Barrons Streetwise, Ben Levisohn 1-12-14